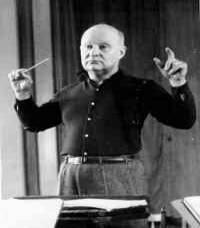 So while most of San Francisco's classical music scene, not to mention the blogosphere, has been all atwitter with Dr. Atomic, my own interest is in a different premiere.

It's the premiere (U.S.) of a long lost work by Hindemith for piano and orchestra.

"The piece was commissioned from Hindemith by a wealthy, historically significant and rather infamous one-armed Austrian pianist named Paul Wittgenstein, who hated it but owned the performance rights and stowed it away. It collected dust for decades until a copy resurfaced around 2002 in a locked room of a Pennsylvania farmhouse where Wittgenstein's widow, Hilde, had lived for decades.

The piece has been performed only one other time, last December in Berlin, where Fleisher was soloist with the Berlin Philharmonic. The pianist describes the piece as having a "jauntiness" and "enormous drive." It is from "a marvelous period of Hindemith's creativity" and has a slow second movement that, by Fleisher's estimation, is among the best things the composer ever wrote." Read the rest here.

I blogged about this back when the work was first (re)discovered and I'm really looking forward to hearing it. Someday. Sigh.

Email ThisBlogThis!Share to TwitterShare to FacebookShare to Pinterest
at 12:38 pm