Pianos and Thugs: A Love Story? 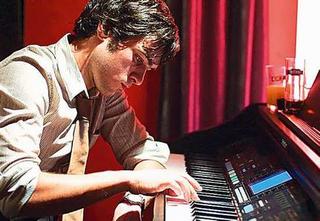 Geez, looks like there's going to be a spate of movies involving pianos, classical pianists, and thugs. Earlier this summer we had Unleashed. A movie I found so bizarre and riddled with implausabilities (to say nothing of the acting) that I found it nearly unwatchable. Curiously, it may just be that I saw this around the time of the Van Cliburn and it somehow got colored by all that... I dunno.

Time magazine has a review of "The Beat That My Heart Skipped":

"In the case of Jacques Audiard's film, The Beat, his protagonist Tom (Romain Duris) is in "real estate." Translated, that means he beats up the tenants in the low-rent buildings he and his partners hope to turn into high-rent properties. On the side, he provides similar services for his slumlord father, who's fading into senility. His late mother, however, was a famous pianist whose talent he has inherited. One day he encounters her agent, who encourages his return to the keyboard. Soon his fingers are flying--and his strong arm is beginning to atrophy." Read the Rest.

This film is a remake of James Toback's "Fingers." Toback's movie is a great one and you really ought to see it. More about "Fingers" here. Somehow I think I'm going to like this one alot better than "Unleashed".

Speaking of pianists and movies, I'd be remiss not to mention the recent passing of Lorna Thayer who gave us one of the most memorable moments in the film "Five Easy Pieces". That scene has become famous as the "Chicken Salad Scene".

"In that memorable moment in the 1970 film, as the voice of authority opposite Jack Nicholson's rebellious Bobby Dupea, a classical pianist turned oil rigger, the middle-aged Thayer proved to be a formidable foil in what has come to be known as the "chicken salad scene." The scene, in which Thayer's character refuses repeatedly to change the house rules, is considered quintessential Nicholson and has had a long afterlife -- no Nicholson tribute or compilation of memorable Hollywood lines does without it. " Read the rest


Also at the movies is the new Batman movie which I really liked alot! In fact, I think it is the best of the Batman movies made so far. The score by Howard and Zimmer (with the help of two orchestrators), however, is probably the least likeable of the Batman movies. More interesting is the electronica work provided Ramin Djawadi. For a different take on the film's soundtrack check out this
review.
Email ThisBlogThis!Share to TwitterShare to FacebookShare to Pinterest
at 9:36 am

And of course, Batman now enters the Batcave by.... playing 3 notes on the piano!

Dang! You're right, Ernie. I forgot about that. Good catch !