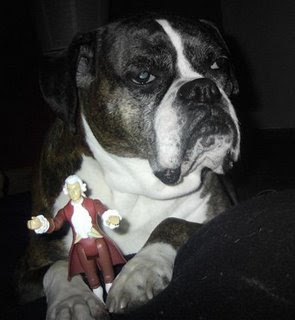 "All knowledge, the totality of all questions and all answers is contained in the dog." - Kafka

Do dogs listen to music? I think so.

My dog often curls up beside the piano while I practice. I like to believe this is because he love music. (interesting aside: he doesn't care for Liszt). And maybe I'm right.

According to recent news report:

"Concert pianist Lisa Spector noticed that, when she practiced her piano, her rambunctious dog calmed down."

Spector's observation sparked a study by sound researcher and a veterinary neurologist, that found"

Read the rest here. Check out the website "Through a Dog's Ear" to find samples of music dogs love.

And it's reported that a dog training centre in the UK treats their pooches to classical radio broadcasts:

"They seem to respond to the classical music best so we leave it on for them whenever we can." Read the rest here

Of course one of the greatest dogs lovers was Glenn Gould. A very interesting article about Glenn Gould and dogs ("Glenn Gould in the Key of Woof") is well-worth a read.

" By the age of 12, Gould’s preference for animal companionship found further artistic expression in the composition of a libretto in which the dominance of the human race was supplanted by an empire of animals. “In Act I,” he recalled, “the entire human population was to be wiped out and in Act II they were to be replaced by a superior breed of frogs.” (These for whom he had even composed a few bars of a chorus in the key of E major, despite an admitted “casting problem.”)"

" Toward the end of his life, he talked often about his dream to buy land on Manitoulin Island on northern Lake Huron where he could establish an animal sanctuary. According to Ray Roberts, it was Gould’s idea of an “ideal existence. ... The ‘Puppy Farm’ was his vision of a place where all lost, stray and sick animals would be welcome.”

It was not to be. Two days after his fiftieth birthday in 1982, Glenn Gould suffered a massive stroke and slipped into a coma. He died a week later on October 4, the saint’s day of Francis of Assisi, patron of animals and animal welfare societies. Gould had bequeathed his considerable estate in equal portions to the Salvation Army and the Toronto Humane Society.

Email ThisBlogThis!Share to TwitterShare to FacebookShare to Pinterest
at 12:28 am