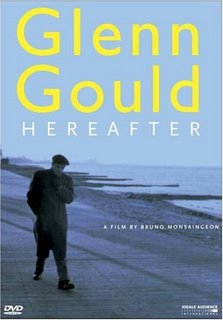 The Lincoln Center's "Voices and Visionaries" swings into view this month. Details here. Noteworthy is the event's attention to Glen Gould. Which is just fine with me as I'm a diehard Gould fan. The event will include a wildly late NYC premiere of the film "Glenn Gould Hereafter". Happily you don't have to be in New York City to enjoy it. It's also available on DVD. You can find it here on Amazon.com

And that reminds me of two reviews of "Glenn Gould Hereafter". The first is a bit of what stricks me as some misplaced snark from Tim Page at the Washington Post. Most curious graf: "As things stand now, it is a bitter irony that Glenn Gould, one of the most original and articulate of musicians, is still not permitted to speak for himself."

The ponderable terms here are the words "still not"? Permitted?

Compare with this from another review, "Monsaingeon's 106-minute film, however, has its own inner logic. Pulling together remarkable archive material, it tells Gould's story in his own words and indeed his own voice."

After thought. Maybe the 20th century visionaries and voices can be boiled down to three (and why not three): Gould, Elvis, and Lacan.
Email ThisBlogThis!Share to TwitterShare to FacebookShare to Pinterest
at 4:31 pm