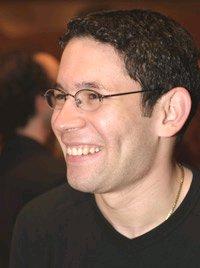 Nice catch from Pliable on the British presses giddy exaggerations. The enormously talented Venezuelan conductor is appearing with the Gothenberg at the Proms.

"The media are having a field day in the UK with the 'unknown Venezuelan' story, and Charlotte Higgins in the Guardian seems to have swallowed it hook line and sinker with a screaming headline... Conducting prodigy to make Proms debut at 24." (ed: link is to the Higgin's piece).

Perhaps the hype will prove more good than harm.

and.. "Moreover the unknown conductor of Venezuelan youth orchestras also has a Deutsche Grammophon contract in his pocket." Well, to be fair, the Guardian piece notes the fact.

But, yes, the claim that "Dudamel is unknown outside his native Venezuela" is wildly off-the mark. And the article seems to shade the tutelage from Simon Rattle.

What I found more interesting in the Guardian was this:

"Venezuela has been funding music education with the goal, according to Xavier Moreno, the secretary of the state foundation for youth orchestras, not to create professional musicians, but to "rescue the children", in a country of 22m where three in four live in poverty."

To my mind, that is the real story that ought to occupy the space being given over to the silly "Unknown Venezuelan" hype-age. In fact, I blogged about it earlier this summer here.

More about Dudamel here and an interview with him here (in Spanish).
Email ThisBlogThis!Share to TwitterShare to FacebookShare to Pinterest
at 4:39 pm

Thx for the link Bart. I've flagged up your take on the Venezuelan music education scene in a comment on my post.

When read together our two views give a much more balanced picture of the Dudamel story than the hysterical angle taken by the Guardian and others.

Such is the combined power of music blogs.