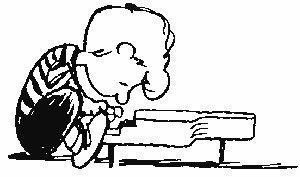 It might be a wee bit of a reach, but it's fun trying no doubt.

The late “Peanuts” creator Charles Schulz had a long love affair with Beethoven. In fact, he listened to his music so much while he worked — from early piano sonatas to the late string quartets — that his albums became scratched and worn over time. Those pitted records are just a few of the unusual artifacts displayed in the exhibit, “Schulz’s Beethoven: Schroeder’s Muse,” opening Saturday at the Charles M. Schulz Museum in Santa Rosa in collaboration with the Ira F. Brilliant Center for Beethoven Studies at San Jose State University. The exhibit attempts to show a clear connection between the musical scores Schulz incorporated into some of his “Peanuts” comic strips featuring Schroeder and the meaning of the cartoon itself.

And if you're wondering how Schroeder and the rest of the gang turned out as adults, then look no further than the play "Dog Sees God: Confessions of a Teenage Blockhead". Read all about it here.
Email ThisBlogThis!Share to TwitterShare to FacebookShare to Pinterest
at 12:15 am