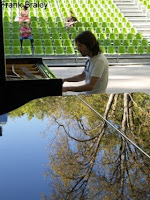 La Roque d’Anthéron International Piano Festival is perhaps a model of piano revelry for pianophiles of all stripes, especially those tired for the grinder that is modern day piano competitions. At least that thought occurred to one observer of the recently concluded Artur Rubinstein International Piano Competition (which ended up not awarding a 1st Place Prize this year). Noam Ben Ze'ev notes that:

"the small southern French town of La Roque d'Antheron, which is no bigger than a neighborhood in metropolitan Tel Aviv. For the past 27 summers, this small town has hosted a piano festival that has nothing to do with competition. Even though the festival's guidelines wholly reject the competitive approach, its 70 recitals draw hundreds of thousands of listeners from all across Europe. Its designer and creator, Rene Martin, chortles at the suggestion that the piano recital is dead."

It does seem like a wonderful event, but I am not sure that it is a workable alternative to the competition treadmill that many young pianists find themselves trapped in until their too old to compete -- and then put out to pasture in some obscure corner of academe.

And now that the Rubinstein has concluded:

".. the finalists have all but vanished from the collective memory in the same way that a Saturday soccer match is forgotten. As for the performers from earlier competitions, they're almost completely gone from memory. "

Email ThisBlogThis!Share to TwitterShare to FacebookShare to Pinterest
at 9:37 am