Today in History: A Strange Music 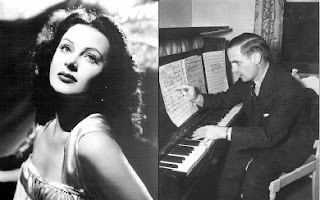 Wired Magazine has published an article that's well worth checking out. The article explores the remarkable collaboration of composer George Antheil and actress Hedy Lamarr to invent a better torpedo. Yes, you read that right.

...Lamarr, a Viennese-born movie actress, would eventually be given a star on the Hollywood Walk of Fame. Antheil, an American avant-garde composer of orchestral music and opera, lived in Paris during the '20s and counted Ernest Hemingway and Igor Stravinsky among his friends. Not exactly the kind of folks you picture tinkering with cutting-edge weapons of war. In fact, their device was way ahead of its time. Although it was patented at the height of World War II, frequency hopping relied on electronics technology that didn't exist yet. An updated version of the Lamarr-Antheil device finally appeared on U.S. Navy ships in 1962 (three years after their patent expired), and was first used during the Cuban missile crisis.

Read the rest here.
Email ThisBlogThis!Share to TwitterShare to FacebookShare to Pinterest
at 11:53 pm